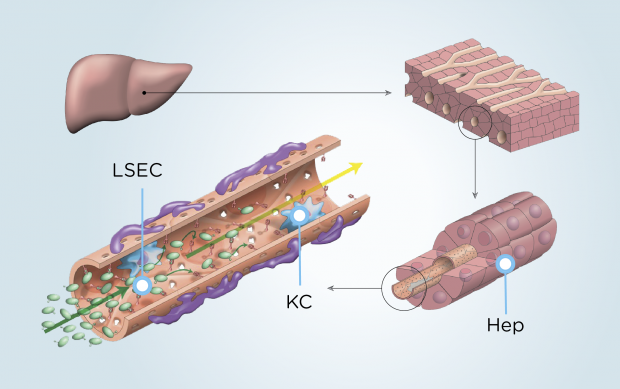 Due to its extremely active blood clearance function, the liver is often a challenge for the bioavailability of biologics and nanopharmaceuticals.

Hepatocytes are most often not the major cell type responsible for liver metabolism of these compounds.

The figure above is an illustration of the liver. The hepatocytes (Hep) surround the liver capillaries (sinusoids), which are lined mainly by liver sinusoidal endothelial cells (LSEC) and Kupffer cells (KC). A fourth cell type, the stellate cell (shown in lila), lies between the sinusoidal lining and the hepatocytes. Hepatocytes make up more than 90 % of the liver volume whereas LSECs and KCs, collectively referred to as scavenger cells, represent only a minute part of the liver mass, but make up about a third of the cell number.

Constituting a surface area of 150 m2 in a normal human liver, the scavenger cells are optimally located and shaped to surveil the contents of the large amounts of blood that pass through the liver vasculature. LSEC and KC are responsible for most of the liver uptake of blood borne large molecules and particles (green corpuscles).Any molecule recognized as foreign molecules by these cells will be effectively endocytosed and metabolized.

Hence, it is crucial to include LSECs in liver uptake, distribution and metabolism assays.

Liver sinusoidal endothelial cells (LSECs) are very thin cells that line the liver sinusoids and separate blood from the hepatocytes. The blood flow through the sinusoid is slow giving LSECs a perfect condition to eliminate macromolecules from the blood. Representing one of the most actively endocytosing cell types in the body the LSEC is regarded as a professional pinocyte and very efficiently eliminates soluble macromolecules and small particles (colloids) from the blood circulation. In fact, the most important site of elimination of nearly all tested soluble waste macromolecules and nanoparticles injected into animals are the LSECs. The LSECs make up only 3,3 % of the total liver volume, but 21 % of the total number of liver cells.

Kupffer cells (KCs) are macrophages located at the lining of the liver sinusoid. They belong to the scavenger cell system in the liver and are professional phagocytes that eliminate large, insoluble particles such as bacteria, cancer cells, activated platelets and aged and damaged red blood cells from the blood circulation. The KCs make up 2,5 % of the total liver volume, and 8,5 % of the total number of liver cells.

Hepatocytes, also referred to as liver parenchymal cells, are specialised epithelial cells that are the most abundant type of cell in the liver. The hepatocytes make up more than 90 % of the total liver volume, and 60 - 70 % of the total number of liver cells.